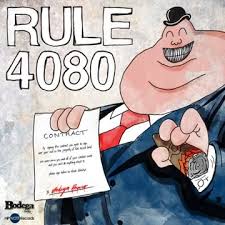 The Underground music movement has a lot of components to it.  There are a lot of pieces to the puzzle that make it work.  From artists to bloggers to graphic designers to internet radio personalities, etc, everyone has their own place on the Underground spectrum.

Deciding what movements and organizations to support is tough.  There are people who are genuinely in it to continue to help Hip Hop move forward while others are in it for the fame and fortune.  There isn’t much fortune in the underground movement so when a person comes across a way to make money, all of their prior beliefs go out the window.  While the Underground frowns upon the theory and concept of “Payola” and “Pay to Play”, it is becoming more and more evident that these ways are filtering into certain underground movements.

While it is in the best interest of everyone to support all who dwell in the underground industry, people decide to only like those who they can benefit from.  Ass-Kissing is a must do and you need to be able to alter your beliefs and standards just to get “in” with some of these folks.  The politics that come with attempting to support a good artist is insane.  Just like in the mainstream world, the underground artist with the most money, flash, and industry “popularity”, are still the artists that get the most play, regardless of their talent. You also have artists and movement leaders who insist on making themselves known off the talents of other people.  That’s  lame as hell as well.  But hey, everybody has a hustle.

While many movement/organization goals and objectives sound great on paper, their actions say otherwise.  When majority of the people who know about your movement say nothing but bad things about it, that’s a problem.  It’s an even bigger problem if you prove them right.  Supporting a movement that doesn’t genuinely support artists and writers but fall to the hands of politics and BS is not conducive to progress.  Taking stock and looking at which movements you support and follow are key in moving forward in this game.  After this weekend, take stock of your circle and whom you support.  If necessary, make it smaller.